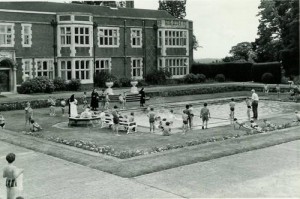 The school was started by the Sisters of the Sacred Hearts of Jesus and Mary. This Order of Sisters was founded in France by Father Victor Braun. The Sisters have, over years, engaged in a variety of services for the poor and the deprived.  They are called to help shape communities of gentleness, justice and peace that witness to the healing, liberating and empowering love of God.

In September 1981, the Order of Sisters, unable to continue running the school, handed it over to the trusteeship of the Diocese of Arundel and Brighton.  The Order of Sisters, whose headquarters are at present at Chigwell Convent, Essex, still support three schools for children with Special Educational Needs. Although no longer belonging to this order, St Joseph’s continues the sisters’ work by channelling the healing, liberating and empowering love of God in all they do.

St Joseph’s was originally just for boys. Over thirty years ago, in 1984, the first girls were admitted. The Course of Extended and Further Education for 16 -19 year olds was also opened in the same year.

The present school buildings and grounds were converted from the old Wyphurst Estate farmstead, in the late 19th and 20th centuries. This provided a private modern ‘house’ and landscaped garden, for the Chadwyck-Healey family. Their family motto ‘Crede Mihi’ means ‘Believe in Me’ – a very appropriate motto for our present day students. It can be seen above the main school entrance and in stained glass, on a ground floor window, overlooking the swimming pool.

Later the house was home to a diamond merchant and his family. They built a huge strong-room in the tower above the main doorway, which still exists.  Much later, prior to the Sisters of the Sacred Hearts of Jesus and Mary being given the building and grounds, the school was used as a rehabilitation hospital for Canadian Servicemen injured during the Second World War.

2007 was the centenary of a very large extension to the ‘house’ – from the tower, at the front of the school, to the end of the wing, opposite the swimming pool.  This was celebrated in July 2007 with an Edwardian themed Arts Week and included an Edwardian picnic for the students and their families.

In May 2013, St. Joseph’s opened a registered children’s home to offer a 52 week home to students. There are currently seven residential houses at St. Joseph’s.

In 2018, St. Joseph’s became an independent charity with its own Trustee board.